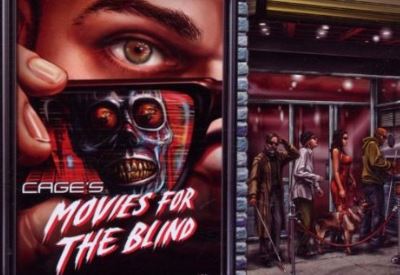 Halloween is always a fun time of the year. The kiddos are out in spooky costumes collecting enough candy to become diabetic at eight years old, young adults are out in costumes slutty enough to make a stripper wince, and everyone is generally just out to have a good time. More importantly for this site however, there’s also a huge array of horror themed hip-hop out there to fit the mood of the season. We’re not talking about struggle-Juggalo horrorcore however. What we want to discuss is the artists that went deeper, combining horror elements with conventional hip-hop to create near-movie like albums.

Welcome to Extraordinary Nobodies’ first ever Halloween Week, where we will have a look at four of our favorite horror inspired albums for an entire week leading up to Halloween (though surely you have figured that out by now).

The first album on the menu is perhaps the least Halloween-flavoured of the bunch, but it’s got one foot firmly planted in the horror genre. Cage’s Movies for the Blind, released in 2002, combined shock rap with New York hip-hop in a way not many had attempted. Though he’s probably most notorious for a short lived beef with rap megastar Eminem, Cage’s first two releases are regarded by many as underground classics. Movies for the Blind started it all, and it’s a record that will leave you feeling utterly disgusted in the best way possible.

Lyrically, Movies for the Blind is the ultimate channeling of rage, drug abuse, and mental illness into bar after bar of tantalizingly shocking lines. Setting the tone is an album opener with Cage expressing an unbridled affinity for PCP and destruction. The album doesn’t quit either, with jump-scare like lyrics woven into even the most New York sounding tracks to keep you on edge. No content is off the table on this record. Murder, suicide, and violence find themselves as staples on what is a freak-show of atrocities. Dips into the norm are rare, but when they do happen it serves as a necessary break from the amazingly grotesque images Cage paints with his words.

Blue collar to corporate blessed the unfortunate,
Like when I put my foot down that bitch still aborted it,
Stuck the canister under my jacket like the lucky one,
‘Uh, sir you can’t leave with that,’ bitch this my fucking son!
(Too Much)

Unlike Hell’s Winter, which saw Cage take a more introspective approach to his music, Movies for the Blind lacks any form of self-awareness. It is an album with an emcee at his most unhinged, unloading rage and hate at anyone who will listen. It’s beautifully executed, and forces you to feel a level of discomfort that most horrorcore albums simply haven’t been able to achieve.

His charisma is also undeniable. It gets to the point that he nearly comes across as a sociopath.

I’m a suicidal failure, look my life’s a failure,
I can’t make it in rap, even my birth’s an error,
Do what I can to catch a quick death,
But I’m meant to be here and that’s the fuckin’ hell I live with.
(Suicidal Failure)

Interestingly, the production on Movies for the Blind is relatively subdue and typical for the underground New York scene at the time. The album featured production primarily by DJ Mighty Mi, but also the likes of El-P, Necro, and Camu Tao (plus a handful of others). With the lineup, it’s no surprise that the sound is so distinctly east coast. Movies for the Blind fools you into nodding along with the gritty production, while throwing lines about suicide and death in your face. The contrast is absolutely wonderful to experience; moreover, the instrumentals are brilliantly cohesive throughout.

Movies for the Blind may not be the ultimate Halloween record, but there are qualities to it that definitely make it a terrifying listening. It’s quite interesting how this album plays out like a series of short snuff films. It’s more disturbing than scary, but it remains as grimy today as it was 14 years ago upon release. Movies for the Blind is also a gem from a time where Definitive Jux and Eastern Conference (the latter of which would release the album) were just beginning to take over the New York underground scene. Whether you’re interested in records from that era, or just looking for something gory to celebrate Halloween, Movies for the Blind remains an underground classic that is wholeheartedly recommendable.

Not for the faint of heart, however.