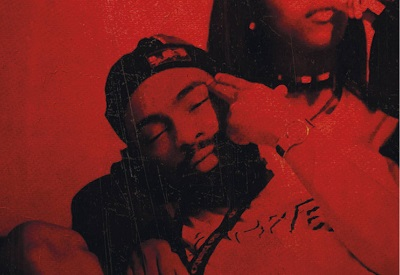 Perhaps as a response to the oversaturation of syrupy pop-trap that has had hip hop in a chokehold for a bit too long, it seems like over the past year underground rap has been making something of a return to what made hip hop so appealing in the early-to-mid-’90s. We aren’t seeing artists trying to recreate boom bap; rather, artists have been capturing the essence of ‘90s rap and adapting it for modern times, effectively resuscitating an approach to the music that appeared to be extinct for two decades. For the most part, artists have been looking to early material by artists such as the Wu-Tang Clan and Nas for inspiration. What we haven’t seen very often, though, is a young artist looking to Brotha Lynch Hung and Esham.

That is, until now.

Hailing from Washington, D.C., up-and-comer ANKHLEJOHN is an aggressive, menacing, raspy-voiced emcee set on creating the most intimidating music you’ve ever heard. In the third quarter of last year, he dropped his debut album, The Red Room. This album is a nice and tight 11 tracks long, and barring the last track “Wetter” (which is a fairly self-explanatory title), it is an unrelenting barrage of threats, violence, and vividly dark stories. While many young artists are making music that could fall under the same descriptions, none do so as believably as ANKHLEJOHN does here. There are times on this record where the listener could genuinely become concerned for his mental well-being, and I mean that in the most respectful and best possible way. Throughout the entire run, the listener is given no time to relax. It keeps you on edge, holding your breath the whole time.

The record features haunting, hellish production that even some of the most unforgivingly brutal rappers would have difficulty approaching. It’s got the same sort of blistering cold atmosphere that you could find on a Mobb Deep album in the mid-’90s. For the most part, the production is very boom bap-influenced, with producers HNIC, Camouflage Monk, Viles, and more utilizing the ever-trustworthy technique of chopping soul samples for a large percentage of the songs here. However, that’s not to say that this record stays in that single lane. “Leonadis” sees Ankh rapping over a fiery trap banger, produced by Montana Eclipz, composed of bells and epic orchestral samples. “Original Man” features ANKHLEJOHN and Hus Kingpin trading bars over some of the most genuinely stomach-churning, anxiety-inducing production I’ve heard in years, courtesy of Big Ghost, Ltd. Overall, the album keeps a very dark, moody, and heavy tone to it, which perfectly compliments Ankh’s style.

Lyrically, ANKHLEJOHN’s strengths mainly lie in his ability to paint vivid pictures, and to come up with face-screwing one-liners. To pair with that, his vocals are, quite simply, absolutely gnarly. Ankh’s got a voice that would not have been out of place in a group like Onyx. However, while Onyx spent most of their time screaming in everybody’s faces waving guns, Ankh chooses to speak clearly and threateningly with a rope in his hands. His vocal delivery is still quite brash and abrasive, but he never raises his voice too loudly. By opting for this sort of delivery, he ends up sounding even more imposing. He seems like he draws from his Brotha Lynch Hung influence to casually rap verses depicting ultraviolent scenarios.

Upon listening to this album, one of the most distinctive features are the ad-libs. We live in an era of hip hop where rappers overuse ad-libs to the point where their music is almost unlistenable in many cases. There’s an overwhelming surplus of rappers imitating tires screeching, gunshots, and voicing otherwise random words and sounds. It could be argued that ANKHLEJOHN doesn’t use any fewer ad-libs than these rappers, however, the way he uses them is infinitely more productive. Throughout the album, you’ll hear him growl “sick, sick, sick” as though reacting to his own lyrics. On a track like “Leonadis” the assorted shouts, screeches, laughter, and other ad-libs make him sound almost like he’s having a schizophrenic meltdown and he captured it on record. I can’t say I’ve heard anyone else use ad-libs in this way, and I absolutely love it.

Unfortunately, I didn’t find this record until a couple of weeks ago, so I’m a bit late, but boy am I glad I found it at all. The Red Room is a definitely highlight of 2017. In this day and age, hip hop needs a little more grit, and even though I’m loving what’s going on in underground rap, I feel the grit is still lacking in a lot of ways. ANKHLEJOHN seems to feel the same way, because he delivered an incredibly raw, gritty, and visceral project with The Red Room. The album is dizzying and beautifully dark, and it’s one that I strongly recommend.