Fan entitlement isn’t a new concept by any means, particularly in the music industry, but it does occasionally cross the line into total lunacy. The Eminem fandom has toed that threshold for years upon years, but lately it seems to have spiraled into something quite sinister from the perspective of a collective that believes in supporting the artist: crowdfunded group-buys of vaulted material never meant to be released. Leaks are somewhat of an expected evil for mainstream artists of course, but what makes this different is the individuals behind the process: a group of fans one could rightfully call Stans due to their adoration of the rapper they’re stealing from. Making it even more pathetic is the fact that their idol, Eminem, is an artist who has loudly spoken out about his music being leaked in the past while emotionally detailing how protective he is toward his art.

For a bit of history, Eminem has faced leak issues in the past as well. Apart from the notable Encore situation back in the day, StudioLeaks ran amok in the early 2010s, releasing a handful of songs from (presumably) 2006-2008. This article in particular isn’t discussing these cases as they were different and happened a long time ago, but something relevant did happen during the StudioLeaks saga. During this particular time period a snippet for a Relapse-era song titled “Nut Up” was released. It wasn’t much, just an underwhelming hook and the beginning to an equally mediocre verse. Nothing much came of it and to most it was likely entirely forgotten; however, earlier this year a group of Eminem fans were presented the opportunity to purchase the entirety of “Nut Up.” Easily enticed by the idea, a group buy was organized through discord with rabid support from the r/Eminem subreddit and other general hip-hop forums. It was successful, at least in the sense that a bunch of entitled fanatics were able to raise several thousand dollars to steal a song from their own greatest of all time. This may have been slightly more excusable had it just been a one-off, unfortunately that doesn’t seem to be the case.

Only a couple of months after the “Nut Up” group buy, a few other snippets were released to the public. Among these, a rather questionable song featuring Eminem on a Joyner Lucas cut rumored to be from the latter’s days with Atlantic. Subject matter aside, it was clearly not meant to have seen the light of day presently for one reason or the other. Whether that be due to an artistic choice, contract disputes, or that it was due for future release, can’t be said for certain, but what is undeniable is an Eminem Stan’s inability to leave well enough alone. Yet another group-buy was organized, setting a goal of $1500 to purchase the full version of the track. In an astonishingly short amount of time, pledges from the depressingly desperate and thirsty reached close to a grand. At the time of publication, the crowdfunding effort remains open and growing. All to rob someone else of their property. 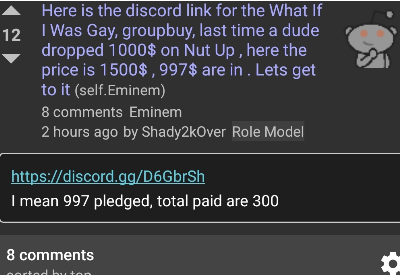 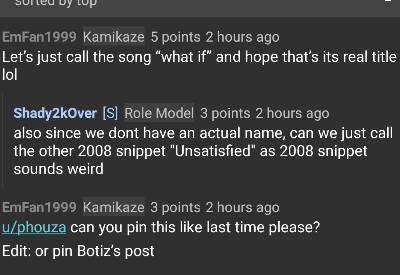 Honestly, it has long since ascended past the point of wack hyper-fans and grown into a legitimate issue.

Another human’s art is not public property. It doesn’t matter how long you’ve been a fan, what their musical output has been like, how rich they are, or how tempting you find that forbidden fruit. Music is an immensely personal form of expression, and nobody is in the position to decide what gets released aside from the original creator. Flat out, bottom line, this type of behavior is unacceptable and it you call yourself a fan of an act while simultaneously jacking their work, you’re a scumbag. Appreciate what you’re given, and learn some respect for other people. If you spend all day posting on an Eminem subreddit and then turn around and contribute financially to theft of his product, what fucking thought process goes through your head to justify that? If it doesn’t amount to much more than “because I want it,” then all of us here would like to leave you with these few parting words: grow up, and support the artists you care about. 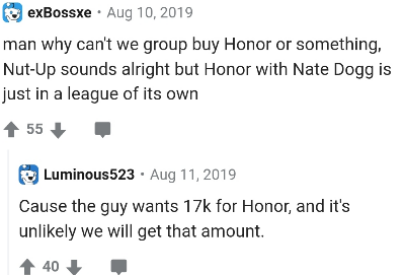 This childish attitude needs to change.