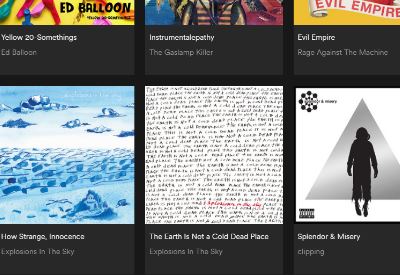 Though streaming hasn’t been a dominant form of music distribution for very long, the idea took root over fifteen years ago with Napster and MusicNET. These services were met with criticism, rejection, and (in the case of Napster) legal issues. Flash forward to today, the service options are different but many of the issues remain the same. However, in the modern era of music, it appears to be that streaming is becoming a necessity.

To understand the need for streaming, one can simply examine the consequences of out right rejecting these services. To speculate on how severe these consequences could be, a simply case study from another industry can be used: Sears.

Sears resisted adapting their catalogue system for far too long. Though the demand for online sales was ever increasing from many loyal consumers, Sears remained set in their ways. This would prove to be a critical failure as the company lost a huge consumer base; moreover, a later attempt to move into the online world would prove futile with the rise of Amazon. Sears had also not exactly been a darling financially, and this failure to adapt proved to be nearly fatal for the company. Over one hundred and twenty Sears stores closed in the year of 2011 alone, and they’ve never quite recovered from the lost business.

Of course this isn’t a perfect comparison for the music industry and streaming. Yet, it illustrates how devastating it can be to ignore the demand for change. Digital sales occupied this space for years, but now the consumers are leaning towards streaming. The music industry as a whole cannot got out of business like a retail chain; however, it can see artists and labels forced into a position where profit is simply not possible if consumer demand isn’t facilitated.

Fortunately, the industry has shown a willingness to adapt before. Whether it be physical media changes, or moving into an online space, music distribution has been fluid. Streaming could also prove to be attractive in its own right.

Streaming offers many advantages for both artists and labels. A 2015 study by Aguiar and Waldfogel (for the European Commission) showed that an increase in streaming correlates to a noticeable drop in music piracy. There is also appeal in how simple it is to get music onto streaming services. For small scale artists, being able to manage their own music on Spotify or Apple Music is often times a simpler process than landing a distribution deal. It has also created a new job space, with online distributors cropping up in order to help musicians get their product to these services.

From the standpoint of the consumer, streaming is a powerhouse. Rather than spending ten dollars for every new release, huge libraries of new and old music are available on demand at a single monthly fee. Audiophiles may take issue with the lack of control over sound quality and song tagging, but for the casual listener streaming services simply makes sense. These services are often incredibly portable, making it far easier to bring your music from desktop to mobile device. As a whole, it is easy to see why streaming is immensely popular with your average listener.

One may wonder why there is still such a resistance to streaming within the music industry, considering these positives. The answer to that is relatively simple: streaming is a necessary, but highly flawed, service.

I gave up and became a Spotify-er,
Paying myself a fraction of a penny playing “Qualifiers”.
(Open Mike Eagle – Dark Comedy Late Show)

Even though streaming has reduced piracy rates, it has also negatively impacted digital download sales (such as those provided by iTunes and Bandcamp). This ultimately reduces the positive impact it has on the music industry; moreover, this is a genuine issue due to the minuscule payout received by artists and labels per stream. Until the problem of royalties can be sorted, music streaming is going to be a somewhat problematic service.

There are of course other issues, such as fragmenting subscribers with service-specific exclusives. Perhaps the most prevalent cases of this was Kanye West’s The Life of Pablo fiasco. The album experienced abnormally high piracy rates due to its chaotic and exclusive release through the Tidal streaming service. Exclusives are certainly an interesting way to attempt to attract new subscribers, unfortunately it also seems harmful to the long term viability of streaming.

Spotify, Apple Music, Tidal, and Google Play give music an accessibility that the world has never seen before. It stands to reason that there will be kinks to work out along the way. Though it’s been close to fifteen years since the idea of streaming started gaining traction, we still exist in the early years of services attempting to do things legally. One can see the clear benefits and necessity of streaming services, but it appears that it will still be a while longer before they are agreeable for everyone.