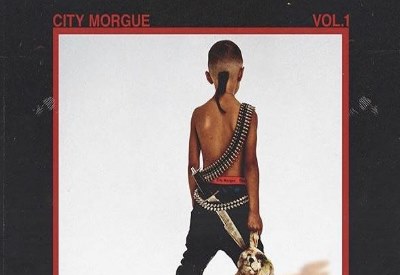 Though time has seen the gradual erosion of definitive regional sounds within the landscape hip-hop, New York has always seemed to exist on the cutting edge. The state has produced some of the sharpest and most unique artists, each carrying the drive to lay claim to their slice of the east’s illustrious history. The results of this progressive spirit have been, at times, shockingly unpredictable. Case in point: City Morgue. Formed by ZillaKami and SosMula, the enigmatic duo wasted little time in working to establish themselves. Armed with the production talents of THRAXX, they began working on music a mere three days after SosMula’s release from prison. Ultimately City Morgue landed on a hyper-aggressive punk and metal inspired sound and dropped a couple of singles notable for their extremely explicit lyrics and controversial videos. This, along with ZillaKami’s impressive feature on Denzel Curry’s TA13OO album, garnered a good deal of attention for the group. A full-length project to capitalize seemed inevitable, and it came in the form of CITY MORGUE VOL. 1: HELL OR HIGH WATER on October 12th.

While it became apparent from the early stages of City Morgue that the bulk of both ZillaKami and SosMula’s appeal would be in their energy, they did make this project lyrically interesting. As expected, their writing throughout was graphic and often painted a picture of an extremely gruesome lifestyle. Whether it was drugs, murder, gunplay, or physical violence, there were no punches pulled; moreover, in spite of the fact that HELL OR HIGH WATER never went full blown horrorcore, it did blur the line between reality and fiction just enough to make it pleasantly uncomfortable. Both artists had such a degree of conviction behind their vocals that it made even the most outlandish lines seem believable. It truly felt like a rap snuff film at times. On top of that, they played off of each other’s styles incredibly well for such a young group. ZillaKami’s rock inspired semi-melodic scream rap was balanced out perfectly by SosMula’s much more traditional hip-hop grounding. At surface level, it would have been easy to declare Zilla the standout on most tracks due to his impressive hooks and loud delivery, but the release would not have worked nearly as well without his counterpart. Additionally, they created a dynamic in which both had ample opportunity to shine. Occasionally one member would contribute to a song in a much smaller role, such as providing a refrain, to allow the other a solo moment under the spotlight. Good chemistry is an important intangible for any group or collective, and City Morgue proved rather quickly that they have it. It elevated the entire listen, turning what could have been a bland assortment of bangers into a wildly fun slugfest of dissipated living.

The aforementioned THRAXX provided the bulk of HELL OR HIGH WATER’s production, with Ronny J tagging along for spot duty. The instrumentals could have easily been described using only the words loud and angry, sounding more like something out of Florida’s underground scene than New York. Featuring distorted guitars atop of heavily bassy trap, there was a certain industrial flavor to this album which fit the prevailing themes quite well. Matching ZillaKami and SosMula’s relentless rage fueled vigor was no issue; however, where the production did lack was in its range. There were definitely standout tracks instrumentally — “Gravehop187,” “So What,” and “SHINNERS13” in particular were monstrously hard hitting — but a lot of the deeper cuts sounded very similar despite being consistently solid. This didn’t hurt the listening experience per se, but some variation may have allowed for the more notably truculent songs to be more impactful. That being said, a debut project having had no blatantly bad beats was rather special in itself regardless of any nitpicking.

Laying the foundation for a new wave in a genre as fluid as hip-hop is never an easy task, but City Morgue did admirably with their freshman effort. Openly admitting in their “The Way Out” documentary with Mass Appeal that their sound is “a work in progress,” the potential for growth within the group was palpable. What was really astonishing though, was their ability to a bring an accessible familiarity while still being a breath of fresh air. For example, some of the SosMula focused moments on this album harkened back to early Three 6 Mafia, yet they were different enough that it felt entirely new. The lack of variety was noticeable and problematic to a degree, but it didn’t totally take away from what was accomplished here as far as instituting a groundwork. They’re self-aware artists, and it’s evident in the way they speak that they know this was the starting point and not the finish line. City Morgue’s genuine ambitious nature and confidence may just make them a force to be reckoned eventually. They may not be there quite yet, but HELL OR HIGH WATER was very much a best foot being put forward.