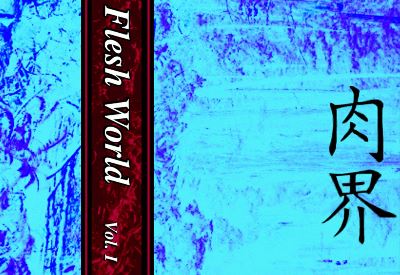 For nearly eight months we have regularly been reviewing albums here at Extraordinary Nobodies. Between our standard reviews of new releases, and the brand new “why was it good” retrospective category, it’s safe to say that we really love reviewing music. Yet, if one was to sort through our review archives they’d notice something odd… We have reviewed zero instrumental albums! This seems like a bit of a tragedy, as instrumental releases have been a big part of hip-hop forever.

Yet, the first instrumental album we’re going to have a look at isn’t even necessarily a hip-hop release! It is more of an ambient record, but it shares a lot of elements that instrumental hip-hop fans will be familiar with! This is particularly true for those who are interested in the alternative side of production. Plus, we do what we want. Fuck genres.

The album in question is Flesh World Vol. 1, a collaborative effort between two established artists (of SCRTS and Chinatown’s Pormer) released under the name Niku No Sekai. This project came out under the relatively young DOOMTRIP Records, a label which specializes in cassette based releases (you should follow them on twitter, sometimes they do awesome download code giveaways). Flesh World Vol. 1 was recorded on new years day, and saw release on DOOMTRIP in April.

So we’re a little behind the times here, but again, we do what we want.

Flesh World Vol. 1 is perhaps one of the most atmospheric releases to come out this year. The overall vibe to the tape is very chilled out, spacey, and slightly unnerving. It is not a long release by any means, but the sound is very cohesive throughout. Those who are already acquainted with ambient releases will most likely love Flesh World Vol. 1. It sounds like space. Listening to this album is like taking a trip through the galaxy while stoned.

The use of distance and beat changes on Flesh World really gives it life. Five tracks feels more like seven or eight, and there is a tangible environment with every second of playback. Though it’s ambient, the record isn’t afraid to grab your attention and force you to focus. The opening track, “WW4”, is a prime example of this. It has some really interesting switch-ups; moreover, the track is over ten minutes long but doesn’t feel dull for a second.

It is a dense piece of art. Don’t mistake “ambient” with “empty”, because this tape is immensely dense listening. Flesh World Vol. 1 is a record that will eventually demand your full attention, even if it does also make excellent casual listening. It is musically interesting enough to be much more than simply background noise. It certainly feels like there is a new sound to discover with every subsequent listen.

There are just so many things happening at once. It is a delightful and fun chunk of material to sink your teeth into.

For the hip-hop fans reading this blog wondering if they should give this tape a listen, yes, you definitely should. If you’re a fan of the stoned-out sound found in the cloud rap scene, this tape is probably going to be right up your ally. It’s a more developed sound as a product of needing to stand out without vocals, but there are clear similarities. Give it a listen, you probably will not be disappointed. Maybe you’ll even discover a new genre that you’ll enjoy.