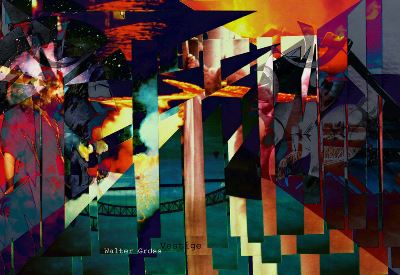 After a decade and a half in the scene, it’s safe to say that Walter Gross is a well-seasoned veteran when it comes to do-it-yourself music. He’s also an artist who has gone through some very interesting times recently. In his released statement about Vestige – the album which this review is tackling – he spoke on the circumstances that gave birth to this album. Moving from America to Berlin, losing the source material in an equipment failure, and creating art in circumstances less than ideal. The end result is this album. An album that serves as an exercise in growth for an artist, and perhaps even somewhat of a musical rebirth.

As a side note, this album is coming via Black Box Tapes. That might not exactly be a household name at this point, but it’s a label run by a classic figure in the underground hip-hop community, Sole. Those who are hugely into rap (and read this site) might find it interesting to know what he’s up to these days… Anyway, onto Walter Gross’ absurdly powerful record!

Vestige sounds like the demented stepchild to post-rock. Walter Gross has blended the melodic evils of groups such as Godspeed You! Black Emperor and Viet Cong (now known as Preoccupations) with his classic breed of experimental electronic to create a unique beast. The instrumentation on this album hits like a noisy wall of sound; while it is probably more accessible than much of Walter’s work, Vestige is in no way an easy album to sink your ears into. While a song such as “Naked Lunch” may have a delectable, head bobbing bass-line, there are copious noise elements happening simultaneously. This leads to a wonderfully challenging listen; moreover, Vestige feels like an album that will retain replayability as there will always be new elements to discover within songs. Amazingly the stylistic differences between tracks – which at times can be quite vast – don’t hurt the cohesiveness of the album. Every song has its place within the environment of Vestige.

A prime example of this is the punk-chant “Fixated on the Light” coming immediately after a much more hip-hop oriented ending to “Window.” Their sounds couldn’t exist in further worlds, yet Walter Gross found a way to bring them together and make it work in a way which felt entirely natural.

The focus on vocals is also very intriguing for a Walter Gross album, and to be completely honest it was refreshing and worked flawlessly. In true post-punk fashion, the vocals are often muddy, aggressive, unnerving, and hidden back slightly in the tracks. They’re unconventional, but so is the entirety of Vestige. Even when the vocals exist purely in a murky haze of words, the way they compliment the instrumentation is gorgeous. They’re not technical darlings, yet they work well.

It’s reminiscent in ways to how Ian Curtis made imperfect singing sound cool in Joy Division. It just fits the atmosphere and tone of the music exceptionally well.

While Walter Gross has been a mainstay figure in the do-it-yourself music community for years, he has reached a new level on Vestige. While it might not be quite as consistently unnerving as some of his releases (such as Goner, for example), it is a mind-melting play-through. The elements of noise, post-rock, punk, hip-hop, and genres yet-to-be named laced throughout are an absolute treat to listen to. Sure, this album may not be a mass-consumable brand of music (and let’s be honest, Walter’s records never will be), but that’s exactly how it should be. The lack of pressure to stay chained to a particular sound has granted the freedom for a record like this to exist. Vestige is a prime example of the power behind the do-it-yourself route in music. There’s something special in the clarity of an artist making the kind of music they want to make, and hitting a sort of full musical realization. That holds true in spades for this release. Vestige is the type of album that should (but won’t) get consideration on top album lists when the year comes to a close.

Also, it should be mentioned that the mixing sounds great. Shout-out to Michael J. Collins of FilthyBroke Recordings (who we interviewed a little earlier this month).

Seriously, if you want to listen to some genre-bending futuristic-but-retro post-punk-yet-electronic (hyphens, so many goddamn hyphens) massive tunes then keep your eye on this record. This is the type of pallet-cleansing releases that are an absolute joy to experience for the first time. The physical release isn’t quite here yet (that tape looks beautiful, though), but it can be streamed/downloaded on Walter Gross’ BandCamp right this very moment.