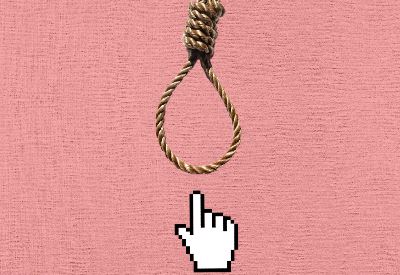 CURTA is a two man band consisting of CURTA on the mic and 4Digit on the instrumentals. Are you confused yet? Don’t be. Much like many assume Slug’s stage name is “Atmosphere” (poor Ant), the same situation happened with CURTA. People saw an emcee jumping around on stage an it was assumed he was the only one under the namesake. So he adopted the name, and his excellent producer took on the title of 4Digit for easier crediting. It’s a beautiful compromise, and they do create all CURTA music together as a team. Truth be told, the music is a thousand times more notable than the slightly tricky name situation for one simple reason: it is really good. Their new EP – coming via FilthyBroke and Hello.L.A – is no exception to this either.

Also, it’s called CLICK BAIT, which is potentially the most culturally relevant album name in the last couple of years.

The production on CLICK BAIT is its most intriguing, and difficult to describe, feature. The overall vibe is inherently hip-hop, but the instrument selection is some sort of delectable electronic chaos. It feels reminiscent of Hellfyre Club’s sound through their early 2010s reign, or perhaps the long lost sonic cousin of 2005 Definitive Jux. It is strange. For instance, the song “Sky High” featuring Serengeti’s alter-ego Kenny Dennis (which should be noted as an amazing feature) has an instrumental that sounds like an acid trip through the scariest carnival imaginable; moreover, every single track on CLICK BAIT has a beat that is equally as interesting. On a short listen like this, that is a wonderful thing to be able to claim. It makes the overall listen feel much more fleshed out than one would expect from a six track release and aids in listener engagement.

With such involved production, there is always a worry about the emceeing on top of it; artists run a very real risk of their voice getting lost behind the lush backdrop. This is not the case on CLICK BAIT however, the rapping is charismatic and manages to blaze its own trail. This is a band, after all, and they’ve got the chemistry to back up that label.

With that in mind, the rapping on CLICK BAIT isn’t going to blow you away with technical prowess or hyper-intricate eight syllable rhyme patterns. Nor are you going to find disgustingly catchy hooks on this project. Let’s be honest though, that style of delivery would be way too boring over 4Digit’s darting electronic production style. Instead, the CURTA style is one of a smooth-yet-strained emotional punchiness. His intensity matches that of the instrumentation, the lyrics hit surprisingly hard, and very rarely does he misstep. His rap style shares similarities with that of an artist like Soul Khan, and has a palpable tension behind every line. His rapping is the exact style this sort of music calls for, and the complimentary nature between instrumentals and their paired vocals is a delight.

As with most EP releases, the only real issue with CLICK BAIT is that it is a bit of a musical cock-tease. The songs plow full steam ahead, but never quite take flight like you would see in a long-play album. This isn’t a criticism of the music itself, quite the opposite actually; the tracks on CLICK BAIT are so enjoyable that it is nearly disheartening when it ends. As mentioned, this is standard drawback for any really good EP, but it is worth noting nonetheless.

At the very least, this small packet of music from CURTA is more than enough to spark interest in the duo. It might end just a little sooner than one would like, but every moment on the release is enjoyable and well worth the listen.