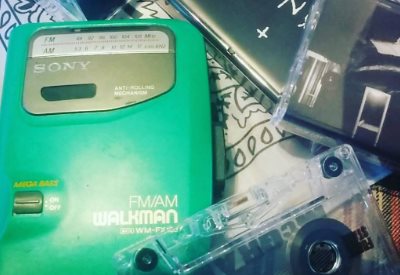 To be completely honest, the title to this article might sound odd to most. How can physical media possibly be more important than ever when digital has steamrolled the industry? At the surface level, it is dead. Retailers are pulling the last of the CDs off the shelves, marking the end of a decades-long music media evolutionary process. Yet, many have never spent more money on CDs, vinyl, and cassettes than they do now. I am extremely bad. If I don’t budget a monthly allowance to be spent on music I suddenly find myself in a position where groceries are particularly troublesome. Financial tomfoolery aside, I’ve come to realize that moving back toward physical releases has changed my relationship with music entirely. With today being Record Store Day my friends and I wanted to take a minute to share our passion for this fading corner of the music scene, and hopefully shed some light on why we consider physical releases more important now than they have ever been.

“In a world where streaming makes music easier to consume than ever, it seems as though its value is continuously decreasing. For a long time now, I’ve been confronted with the question “why buy a song when I can download it for free?” However, with the increasing prevalence of streaming, which poses as a way to “support” artists in a cheap (potentially free) way, the statement seems to just be given more validation. I’ve always felt that streaming is dissatisfying in many ways; there’s no connection between fan and artist. Physical albums allow that connection to exist. You have something tangible to hold, you have to store and maintain them, you get to surround yourself with what you love. They allow the music to keep its value in a market where it’s more dispensable than ever.”
–@RajinBuu

“Buying records means reading liner notes. It means learning about the friends and family involved with the project and glimpsing into their world. It also meant (like in the case of Outkast) learning just exactly what they were saying in the days before OHHLA or Genius.”
–@deaconlf

“As both an artist and a music lover I appreciate something tangible and it warmed my heart as an artist to know that so many fans wanted to buy a physical copy of our debut project, my mom bought one my dad bought one it was something that they can look at and say “wow my kid did this” and fans can look at and say “yeah I can touch this, I can hold on to it, I can frame it” it’s like a time capsule from a forgotten period where projects stayed in your rotation for longer than a week and reviews weren’t done instantly but it’s an incredible thing to be apart of, physical music goes right along with t shirts and posters as genuine mercy.”
–@MTFRyourmom of @_Nobodies

“Physical releases, no matter the format, are more important than ever now. Much of our lives exist between ones and zeros, so holding and hearing and smelling something like a record can really fill the binary void… Establish a sense of connection beyond the internet. As soon as the needle hits the groove something real happens and it is fucking beautiful. It’s almost primal at this point. I think this is true with vinyl, cassettes and CDs. All formats provide a tangible experience that sounds better than streaming, hope people stop arguing about ‘superior’ formats and just focus on making something beautiful and real. Physical releases are awesome”
–@FilthyBrokeRex

For myself it’s much of the same. I crave the connection to art that only physical media can provide. From the beauty of large format cover art to the excitement of finding carefully placed easter eggs inside the album booklet, there is a tactile appeal to the senses that cannot be found anywhere else. For me, it transforms listening to an album from a simple act of consumption to an event that feels special and unique every single time. The thrill of entering a record store or thrift shop and crate digging can only be surmounted by the childlike wonder I feel when my hands finally reach something that I want. My music collection at any given moment is a treasure trove of memories, personal discovery, and adventure. It’s something I curated for myself and nobody else; a scrapbook of self-assuredness that carries all my convictions in taste. I wouldn’t trade that feeling for the world.

There’s also the element of showing that you care. The artists I love create music that becomes an integral part of who I am, and as such I want to support them in any way that I can. Attending concerts isn’t realistic all the time, but buying something that I can hold, show people, and proudly display is always an option. Digital media feels so incredibly disposable, and to me that undermines the effort and dedication these individuals pour into creating something for us to enjoy. Sure, I can acknowledge that 25 or 30 dollars for a vinyl record sounds expensive; however, when you start to consider the entire process behind the album’s existence, it really isn’t that much money. Support keeps people creating. At the end of the day, I’m more than willing to shell out extra if it helps my favorite musicians are able to stick around a little longer. Fraction of a penny streams don’t pay the bills for anybody who isn’t already a star, and that fact alone would be enough for me to proclaim physical media’s importance in the modern climate.

If you still carry any doubts, please take the time to visit a record store today (or at any point in the near future). If you’ve never been fortunate enough to take the time, it is a vastly different experience than endlessly perusing music on Spotify or Google Play. It’s a world that not enough people take advantage of these days, yet there’s a reason it pulls so many of us in. We could sit here for days and try to explain, but really you won’t get it until you try for yourself. Who knows, you could just end up catching the same bug that bit the rest of us from the very moment we purchased our first albums. Apologize to your wallet on my behalf, and have fun! 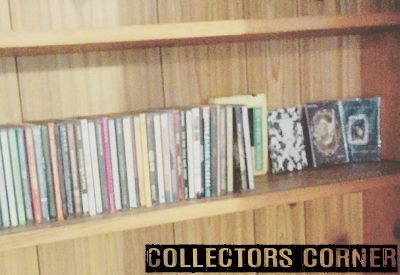 Welcome to the newly revamped Collectors Corner. We’re going to be transitioning from speaking about multiple albums at a time, to a more in depth look at unique individual releases. A bit of discussion of some of our personal favorites from our collections. I’m a big fan of creative packaging when it comes to albums. In an era where digital is becoming the norm, an act going the extra mile with design can be the difference maker when it comes to putting out the extra cash for a physical copy. It can be particularly attention grabbing when it’s an unconventional CD release. CD can be a pretty boring piece of media at face value. Standard jewel cases feel incredibly sterile; even digipaks can seem uninspired, regardless of the fact that they tend to be better looking than plastic casing.

Today we will be having a look at one of these extra cool albums, clipping.’s 2014 record CLPPNG. Released on Sub Pop Recordings, catalogue number SP1071, in compact disc format.

When I ordered my copy of this record, I had very little idea of what to expect. It was around the time I had first started my music collection, and all I knew was that I dug the album. When the parcel came in the mail and I finally got my hands on it I could not have been more pleasantly surprised. Upon opening the tri-fold outer casing, you’re greeted with very creatively edited pictures of all three members of the group in a very pleasing black and white. The print quality is high, leaving all of the artwork looking well defined and clear. The cardboard itself is incredibly thick and has a slick finish. It feels quite durable, and the corners don’t seem to be quite as prone to breaking down as you might expect from a digipak. Overall, I am a fan of CLPPNG’s outer package. It’s not a groundbreaking design by any means, but it’s cleanly put together and tastefully minimalistic. This creates a kind of contrast with clipping.’s noisy and chaotic music that I thought was quite clever.

That aside, there are some internals to discuss as well. The two outer segments of the tri-fold digipak are hollow and have some goodies to look at. One contains the credits booklet, and the other contains the disc itself.

The credits booklet was a necessary addition, but it is not overly substantial. It contains song names and additional credits that aren’t listed on the digipak tracklist. I would have liked to see a lyric booklet, or possibly some more photos of the group in a style similar to those in the tri-fold; however, the rest of the packaging is relatively minimalistic and this does fit that style. It felt more like a reference sheet, but it still looks really nice; moreover, there are some interesting tidbits as far as minor vocal credits that will appease the super-fan curious about all details of any given song.

The CD is probably the most interesting part of the album packaging in my opinion. The artwork on the disc is just a minor reworking of the album cover, but the real showstopper is how it is stored inside the digipak. Rather than clicking into a plastic holder or just slipping inside the case, the disc is wrapped in a paper dust cover very reminiscent of those you would find in a vinyl release. This protective sleeve even has a bit of a design on it that pairs up nicely with the album artwork. It’s such a small little thing, but it turns a cool tri-fold digipak into something special. Given my own personal preference for vinyl (as well as its resurgence in recent years), it just felt really awesome to open up a CD that takes influence from that style of packaging. Vinyl is expensive, and having a more affordable option such as this offering part of the same tactile experience is fantastic.

As far as sound quality goes, it’s a CD so there aren’t really any surprises. CD doesn’t tend to have the variability in terms of sound quality compared to vinyl pressings, and CLPPNG is no exception to that. It sounds great, but it offers no benefit when compared to the digital version of the album (particularly if you have the album in a 320kbps mp3 or lossless format). This release isn’t a must for audiophiles, and lends itself much more to those who simply love collecting physical music.

Ultimately, the CD version of CLPPNG is well worth buying if you’re a fan of the release. I would have personally preferred the vinyl, but I would be lying if I said this wasn’t unique. The assembly and design of the packaging are both superb, well above the average I would hold against compact disc. Though I do have a few deluxe editions and short run releases from other artists that I like more, this is probably one of my most cherished standard versions of an album in this format that I own. Time and time again I find myself smiling when I open up the digipak to give the record a playthrough. There’s just something about the minor details that make CLPPNG feel like something special. I recommend it fully for the avid music collector.